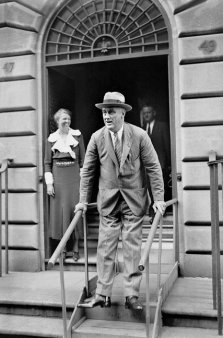 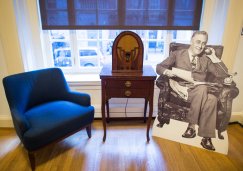 At the stately age of 108, the handsome double-width townhouse at 47-49 East 65th Street bears no resemblance to a certain tower of gilt, glitz and high security just 12 blocks away.

Yet the last time a president-elect ran a transition from his home on the east side of Manhattan, it took place in that 65th Street residence, the home of Franklin D. and Eleanor Roosevelt, on a street of understated grandeur.

“It was the Trump Tower of 1932-33,” said Harold Holzer, the director of Hunter College’s Roosevelt House Public Policy Institute, which now occupies the building.

If an estate in Hyde Park, N.Y., is landmarked in our historical consciousness as the Roosevelt residence, the family’s onetime city house, about 90 miles south, has its own claim as the incubator for the public lives of Roosevelt and Eleanor, two of the most consequential figures of 20th-century America. They lived there for most of 25 years.

This week, on one of the last days of the semester, a Hunter College student wearing a football jersey stood before a map of New York City, showing the locations of landfills to a class. Part of that classroom had once been a bedroom where Roosevelt recuperated after he became paralyzed with polio.

Down the hall, two other students sat in front of an unlit fireplace, facing laptop screens. Seated by that same fireplace on the morning of Nov. 9, 1932, Roosevelt spoke to the nation in a radio address after he was elected to the first of four terms as president, a moment filmed for a newsreel. “A 1932 form of tweeting,” Mr. Holzer observed.

As the new Roosevelt administration took shape, a crowd of reporters — along with police and Secret Service security details — smoked cigarettes and made messes in a modest ground-floor parlor while they kept watch on who went upstairs.

Among those climbing the stairs a few weeks before the inauguration was Frances Perkins, who brought with her a slip of paper listing the policies she wanted Roosevelt to support before she agreed to become secretary of labor and the first woman to hold a cabinet post.

One of the items on her list was “old-age insurance,” known today as Social Security.

Roosevelt was governor of New York when he ran for president, and he had appointed Ms. Perkins, a champion of worker rights, as the state’s first labor commissioner. After a call summoning her to the house, she expected to be offered the cabinet job.

She arrived at the house on the evening of Feb. 22. Security had been tightened: Just one week earlier, a gunman in Miami fired five shots as Roosevelt was shaking hands with the mayor of Chicago in a park. The mayor died, and four others were wounded. Roosevelt was unhurt.

“The house was strangely disorderly on the ground floor, showing at once that although it had been a nice quiet private house where people lived with some evidence, it had now become a general camping place for reporters, politicians, policemen, detectives,” she said, continuing: “That little hall was just piled high with overcoats, hats, umbrellas, briefcases, notebooks, sheafs of paper, red envelopes, any amount of things, not only on the chairs and tables, but on the floor.

“The rather handsome Chinese rug on the floor attracted my attention by its foul condition. It was just terrible.”

Sara Delano Roosevelt, the president’s mother, built the “quiet private house” for herself, and for her son and his wife. Behind the street facade of a single residence were twin townhouses with separate entrances. Both had been built with elevators — a luxury in 1908 when the Roosevelts moved in, and a necessity by 1921, when Roosevelt lost most use of his legs to polio.

Eleanor and Franklin did not spend much time in the house after 1933. With the death of Sara in 1941, they sold the two buildings (each with 17 rooms) to Hunter College for $50,000. Heavily used by the college, the merged buildings became so run down that they were closed in 1992. The current president of Hunter, Jennifer Raab, raised $24.5 million to restore the structure. (Deborah S. Gardner, the house historian, said information about guided tours on Fridays and Saturdays is available at www.roosevelthouse.hunter.cuny.edu.)

On the night Ms. Perkins was offered her post, she ran into Harold L. Ickes in the townhouse. He would become the secretary of the interior and, with Ms. Perkins, was among the people who drove the principles of the New Deal — grand-scale public works, unemployment insurance, minimum wage, Social Security — into the realities of the Depression

In her oral history, Ms. Perkins recalled being in Roosevelt’s study, and his response when she laid out her ideas: “He said: ‘Yes, I think that’s all right. I’ll back you.’”