On Tuesday, February 28, 2017, President of the American Academy of Arts and Sciences Jonathan F. Fanton addressed more than 100 Congressional staff members and members of the Academy’s Commission on Language Learning at a press conference to release its final report and recommendations at the National Press Club in Washington, D.C.

Good morning.  As the President of the American Academy of Arts and Sciences, it is my pleasure to welcome you to the release and first public discussion of our new report, America’s Languages: Investing in Language Learning for the 21st Century.

This is the final publication of the Academy’s Commission on Language Learning.  The Academy created this Commission in response to a bipartisan request from members of the United States Senate and House of Representatives: Senators Orrin Hatch, Brian Schatz, Tammy Baldwin, and Mark Kirk; and Representatives David Price, Don Young, Leonard Lance, and Rush Holt.

The title of this report, America’s Languages, refers to an important historic fact about our nation, and one of its great strengths.  As the Commission writes in the report’s introduction:

“Linguistic diversity is deeply embedded in our history. The English we speak is only one of many European, Native American, African, and Asian languages that have been spoken on the North American continent. This diversity is a cherished part of our nation’s past, a fact of our present, and a key to our future: a valuable asset in our relations with other nations and cultures and a benefit to our children as they grow up in an interconnected world.”

In addressing the need for enhanced language education, this report brings the American Academy all the way back to one of its original concerns.

As many of you know, the American Academy was founded in 1780, by John Adams, James Bowdoin, John Hancock, and other leaders who helped to establish the new nation.  In the midst of the Revolution, they believed that the key to America’s long-term strength and survival was, in the words of our Charter, “to cultivate every art and science which may tend to advance the interest, honor, dignity, and happiness of a free, independent, and virtuous people.”  Since our founding, groups of Fellows have come together, through the Academy, to examine some of the most pressing challenges of their times.  The Academy’s membership now includes 5,000 Fellows and 600 Foreign Honorary Members including many of the most accomplished scholars and practitioners in the sciences, the social sciences, the humanities, the arts, and public affairs.

In 1781, shortly after our founding, Bowdoin and his colleagues created a committee “to arrange the several subjects which…should principally engage the attention of the Academy.”  The committee’s recommendations included the examination of vegetation, mineralogy, mathematics and astronomy, and languages, stating “that the object of the ninth class [of study] be the rationale of Language.”

In the years that followed, the Academy assisted in the distribution of Noah Webster’s dictionary, in the recording and preservation of Native American languages, in debates about the creation of a more uniform English grammar and spelling, and in the exploration of Esperanto as an aid in communication within the scientific community.  Today, we follow in that long tradition by introducing what is likely to be one of the Academy’s most important contributions to this field of study.

As many of you may know, this commission is a follow-up to the work of our Commission on the Humanities and Social Sciences, which produced its influential Heart of the Matter report in 2013.  That commission advocated a broad education for all Americans, an education rich in the humanities and social sciences as well as the STEM fields.  An entire section of The Heart of the Matter recommended ways to “equip the nation for leadership in an interconnected world,” including the promotion of language learning and study abroad. 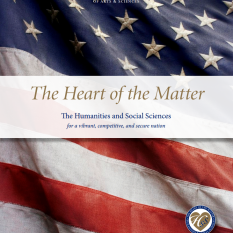 America’s Languages is an elaboration of that vision.  It offers its recommendations in five categories, each focusing on ways to build the nation’s language capacity—to gather and organize our resources in order to teach more Americans to read, write, and speak more languages at an earlier age.

This report arrives at an important moment in our history.  While English continues to be the preferred language for world trade and diplomacy, there is an emerging consensus among leaders in business and government, teachers, scientists, and parents that proficiency in English is not sufficient to meet the nation’s needs in a shrinking world. Current research suggests that only 10% of the U.S. population speaks a language other than English proficiently.  We can and must do better.

American businesses search for employees who can understand the nuances of international communication—so that nothing is lost in translation—and we all recognize the importance of language expertise to diplomatic, military, and cultural missions around the world. But language education is increasingly important right here at home, as growing numbers of American citizens speak languages other than English, and as parents begin to understand that there are real benefits to teaching their children a second or third language in addition to English: cognitive enhancements, important habits of mind, and new and valuable perspectives on the world.

America’s Languages is, above all, a reminder that there is “much to gain by participating in a multilingual world, and so much to lose if we remain stubbornly monolingual.”

Language education is a matter of national interest—critical to our ability to lead productive lives at home and abroad.  It is for this reason that the Academy’s founders, who were also the Founders of the nation, believed the study of languages to be central to the Academy’s mission, “to cultivate every art and science which may tend to advance the interest, honor, dignity, and happiness of a free, independent, and virtuous people.” We are grateful to the Members of Congress who followed in this tradition by requesting this study, and we hope that everyone in this room will find an opportunity to join with the Academy in its efforts to advance the report’s recommendations in the year ahead.  Thank you.