On November 10, 2016, Jonathan Fanton introduced a panel discussion focused on “Populism and the Future of American Politics.”

The discussion served as the 2045th Stated Meeting of the American Academy. 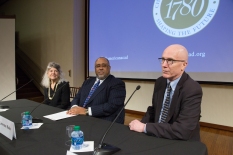 From left to right: Jennifer Hochschild, Lawrence Bobo, and Charles Stewart discuss populism at the House of the Academy in Cambridge, MA.

Charles Stewart III and Jonathan Fanton converse during the reception for “Populism and the Future of American Politics.”

This evening’s program, on “Populism and the Future of American Politics,” could hardly be more timely—indeed, it has been a subject that has likely been on the mind of everyone in this room for the past several months. And when we chose it we did not anticipate the outcome of Tuesday’s election. I think this is a topic that some—maybe many—of us feel the need to talk about this week.

“Populism” is a term that did not exist when the Academy was founded in 1780. When the authors of the Academy’s charter wrote that the “end and design of the institution of the said Academy is to … cultivate every art and science which may tend to advance the interest, honor, dignity, and happiness of a free, independent, and virtuous people,” they meant something very different by the term “people” than did those who coined the “populist” label in the late 19th century.

It is clear that the founders of the Academy would not have described themselves as populists in the current sense of the term. Their view of classical populism would have been informed by the warnings of classical philosophers, such as Aristotle, who in Politics defined a “demagogic democracy” as a society where a popular faction “takes the superior share in the government as a prize of victory,” incited by the misleading rhetoric of a charismatic leader. Plato laid out the results in his Republic, predicting that the people—an “obedient mob”—would “set up one man as their special leader … and make him grow great.” These observations have more meaning to me today than when I prepared this Introduction two weeks ago.

These warnings were on the mind of the Founders of the United States, who struggled with the question of how much democracy was too much. Academy Fellow James Madison (elected 1794) wrote in The Federalist No. 49 of his fear that “the passions … not the reason of the public would sit in judgment,” and he helped write a Constitution that would make it difficult for the new nation’s government to be swayed by fluctuating popular desires.

Many of the Academy’s early members were torn between the desire to create a government “of the people” while also preserving the new nation’s stability. Massachusetts merchant Elbridge Gerry—who was elected a Fellow of the Academy in 1781—wrote while a delegate to the Constitutional Convention in Philadelphia in 1787 that “The evils we experience flow from the excess of democracy. The people do not want virtue, but are the dupes of pretended patriots.” This skepticism about the political judgment of the masses and the concern about the persuasive power of misleading rhetoric were no doubt influenced by the experience of witnessing Shays’ Rebellion the previous year, when Daniel Shays led 4,000 men in an armed uprising in Central Massachusetts against the government in response to perceived economic injustices and the suspension of civil rights.

Anxiety over potential instability like that embodied in Shays’ Rebellion drove many of the discussions at the Constitutional Convention in Philadelphia, and shaped the form that the Constitution ultimately took—a Constitution that Gerry famously refused to sign, feeling that the national government it created was too strong. Clearly, Gerry and many of his compatriots were struggling with the difficulty of inventing a government that allowed the people to express their views while not falling victim to rapid swings of public opinion.

Massachusetts continued to serve as a testing ground for the influence of popular political movements into the nineteenth century. In the 1850s, a national Nativist movement—the Know-Nothings—arose in response to concerns about immigration and the spread of slavery. This populist movement would find its only real electoral success here, in Massachusetts, where the American Party swept almost all of the statewide offices in the election of 1854. In claiming control over the government of the state, the American Party also succeeded in splintering the Whig Party, at both the state and national level. In the presidential election of 1856, there was no Whig candidate. Instead, John C. Fremont ran as the first nominee of the newly formed Republican Party.

Voters in 1854 likely did not consider that they were witnessing a crucial realignment in the future of American politics. In this election season, however, we need to consider whether—or how—this year’s election has the potential to change what our political system looks like going forward. Tonight we have assembled a distinguished panel of experts to help us think through the complicated legacy of populist movements in American politics, and to consider their implications for the future of our political culture.

At this point, President Fanton turned the program over to Charles Stewart III.

Following the panel discussion, President Fanton noted that the Academy can play an important role in convening conversations about the state of our democracy and the health of its institutions. In particular, President Fanton expressed the need for the Academy to reach out to those who have different views and engage in dialogue that will build more common ground. “The Academy’s work in encouraging civil discourse across divides in our society is now more important than ever,” he said.