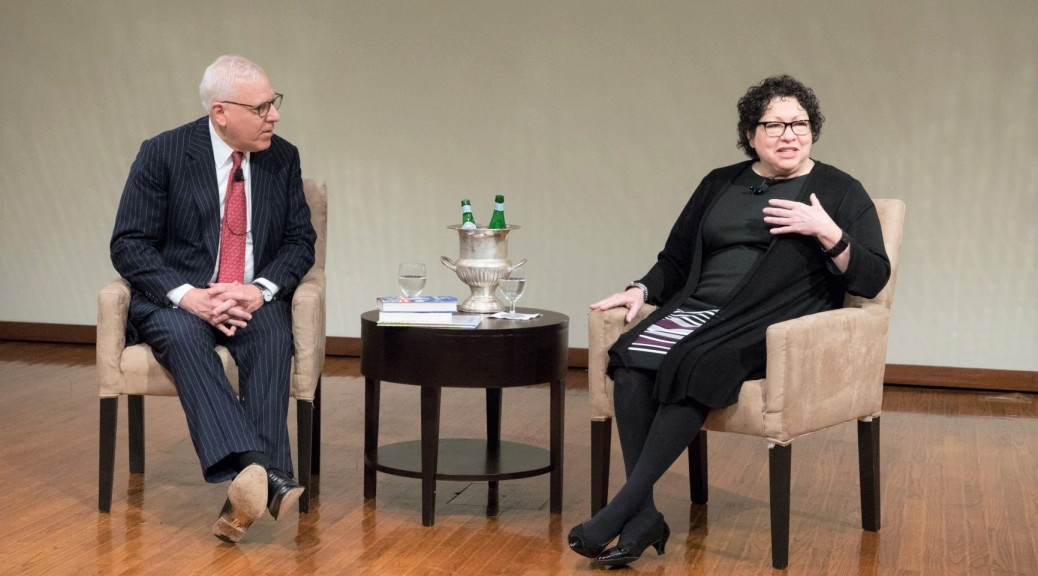 These remarks were given by Jonathan Fanton as an introduction to the Second Annual David M. Rubenstein Lecture with Associate Justice Sonia Sotomayor. The lecture was held on Sunday, October 7 as part of the Academy’s 2018 Induction Weekend.

Good morning and welcome to the final session of our Induction Weekend. I now call to order the 2072nd Stated Meeting of the American Academy of Arts and Sciences.

It has been a wonderful weekend.  I hope you have found it as inspiring as I have.  As you have heard, there are many ways to participate in the life of the Academy. We encourage your active engagement and we would like to hear from each of you in the years ahead.

Our Induction Weekend is an elaborate undertaking, requiring a very precise choreography. I want to take a moment to thank the Academy staff for making the weekend as welcoming, as substantive, and as seamless as possible.  Would the staff who are here please raise your hands so we can recognize your extraordinary efforts?  In particular, I would like to thank Kristin Josti, our events coordinator, who has been your point of contact for the past six months. Kristin has done a terrific job to ensure the weekend’s success.

As the defense attorney for the British soldiers who fired into the crowd of colonists during the Boston Massacre, John Adams, the most prominent Boston lawyer of his era, described what he considered the ideal operation of the legal system: “The law no passion can disturb.” Adams continued, “‘Tis void of desire and fear, lust and anger…[W]ithout any regard to persons, [it] commands that which is good and punishes evil in all, whether rich or poor, high or low.”

As we know, Adams would soon lead a revolution against the very people he was representing when he spoke these words, and his image of justice—objective, impersonal, the same for everyone regardless of financial means or social status—would become an essential aspect of his vision for the new nation. What Adams proposed in his defense was that all persons—angry colonists and frightened soldiers alike—should have equal access to justice.

It is not surprising, therefore, that this Academy, invented by Adams, would inherit his concern for the proper functioning of the law in the United States.

This morning, we are honored to welcome a newly inducted member of the class of 2018, Associate Justice of the United States Supreme Court, Sonia Sotomayor.

Justice Sotomayor is the thirtieth Supreme Court Justice to be elected to the Academy, joining some of the most important and influential jurists in our nation’s history, including John Jay, John Marshall, Joseph Story, Oliver Wendell Holmes, Benjamin Cardozo, Felix Frankfurter, Earl Warren, and Sandra Day O’Connor.

It is appropriate that she joins us at a time when we are renewing our traditional interest in the legal system, the courts, and the way that individual Americans experience the law in their everyday lives.

Over the past three decades, the Academy has organized three major projects on legal issues. From 1988 to 1996, we sponsored the Legal Cultures project, which examined the relationship between legal systems and the cultures in which they are embedded. From 1999 to 2002, we convened a distinguished group of scholars to assess the evolution of law over the previous hundred years, in a project called Law 2000. And from 2002 to 2008, we supported a project called The Independence of the Judiciary, which examined the relationship between Congress and the Supreme Court.

During this period, we also dedicated two issues of Dædalus to legal topics:

I am pleased to report that the Academy is now engaged in a new set of legal projects. The current issue of Dædalus on Science and the Legal System, edited by Shari Diamond and Richard Lempert, is an examination of the challenges and opportunities posed by the increasing role of scientific evidence in legal cases.  And a new set of Academy projects is now focusing on access to justice for low-income Americans.

According to the 2017 Justice Gap Report of the Legal Services Corporation, 71 percent of low-income households experience at least one civil legal problem each year, including issues related to health care, housing conditions, and veterans’ benefits.  That adds up to tens of millions of problems annually, but very few of these households receive the help they require. In fact, according to the LSC survey, they receive inadequate or no legal help for 86 percent of their problems.

In 2015, the Academy hosted a successful symposium about this issue, and the scholars, judges, and practicing lawyers in attendance all concluded that the Academy could help address the issue in three ways.

First, we will help broaden public discourse and inform more people about the crisis by publishing an issue of Dædalus, this coming January, on Access to Justice. It will be edited by Rebecca Sandefur of the University of Illinois at Urbana-Champaign, Lance Liebman of Columbia University, and journalist Lincoln Caplan.

Second, we are trying to improve our knowledge about the crisis, especially by addressing the need for more and better data. A new project co-chaired by Mark Hansen of the University of Chicago and Rebecca Sandefur is helping identify the information we would like to have in order to answer even the most basic research questions about civil justice. For example, we don’t know how many people enter civil proceedings each year without representation—an important statistic for any reasonable policy discussion.

Finally, a third project will set national priorities for the improvement of legal access. Co-chaired by John Levi of the Legal Services Corporation and Sidley Austin, Martha Minow of Harvard University, and Ken Frazier of Merck, it will focus on four common categories of civil legal problems: housing, family, health care, and veterans’ affairs. The project will consider the adoption of digital tools like translator apps, the empowerment of non-lawyers to provide some legal assistance, and new ways to triage and resolve legal issues before they reach the courts, among other innovations.

In all of this work, we are mindful of a quote by Nathan Hecht, Chief Justice of the Supreme Court of Texas and a participant in the Academy’s projects: “Justice for only those who can afford it is neither justice for all nor justice at all.”

And in this way, we are still honoring John Adams’s ideal that the law should serve everyone equally, “whether rich or poor, high or low.”

And so, to begin the program, it is now my pleasure to introduce our moderator, David Rubenstein.

David was elected a Fellow of the American Academy in 2013 and is the very model of engaged citizenship.

Two years ago, David presented the Academy with a $5 million gift to establish the David Rubenstein Enhancement Fund. This gift supports new Academy projects and exploratory initiatives, and helps us enhance the visibility of the Academy. It also supports our work in legal services. I am pleased to say that David is both a participant in our design project and co-author, with John Levi, of an introduction for the forthcoming issue of Dædalus. We are so grateful for his generosity and engagement.

As host of The David Rubenstein Show: Peer-to-Peer Conversations on Bloomberg Television, David is also a skillful interviewer—and so we are grateful and honored that he has agreed to moderate the Second Annual David M. Rubenstein Lecture.