Good morning and welcome. I am Jonathan Fanton, President of the Academy.  I hope you are all rested and ready to engage in a lively discussion of your colleagues’ papers on this first day of the authors’ workshop. We have a full agenda and I look forward to the conversation.

Shari Diamond originally proposed an Academy study on Science and the Legal System two years ago, at a meeting of Academy members at Northwestern.  The idea received robust support at that meeting, and indeed, over the past two years I have found it is a topic that resonates strongly among the Academy’s members, and not only those from the sciences and law.  We are pleased at how the study has developed under Shari’s and Rick Lempert’s direction. 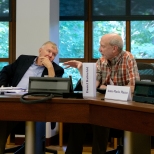 My own interest in this topic dates back to my days at the MacArthur Foundation.  During my tenure as president, the Foundation launched a Law and Neuroscience Project that was one of the early systematic efforts to bridge the fields of law and science. Today, this research network continues to promote the accurate presentation of neuroscience in legal cases and explores how new knowledge from neuroscience can be used to improve the justice system. Joe Sanders and Nancy Gertner have been active contributors to this project, as has Jed Rakoff, who was a valued advisor to me during its creation.

The Academy study on Science and the Legal System explores similar issues in the context of the broader scientific community. Scientists’ willingness to get involved in the legal system has consequences for the quality of expert advice. This question has not been fully explored by previous studies, nor has prior work systematically examined the variety of alternative approaches that might be used to encourage and introduce better quality scientific advice.

Bringing scientists and legal experts together to understand and recommend ways to improve the relationship between science and the legal system is thus the primary goal of this project. This is a broad topic, and so Shari, Rick, and John Randell (John E. Bryson Director of Science, Engineering, and Technology Programs) agreed that an issue of Daedalus would be the best way to facilitate a wide-ranging discussion that incorporates many different perspectives and experiences.

Each of you was invited to write for this issue because of your expertise and the contributions you have made to public and academic discourse on the relationship between law and science.

To complement your essays, we have also undertaken a survey of Academy members exploring their attitudes toward the legal system, reasons why they accept or refuse to participate as experts in legal proceedings, and their experience when they do participate. The survey was administered last summer and generated nearly 400 responses from members of our natural and social science classes.

The first analysis of the survey data appeared at a panel led by Shari and Rick as well as Elizabeth Loftus, who is here with us today. The panel discussion, “When the Legal System Seeks Help From Scientists: Successes and Failures,” was part of an all-day seminar in February at the American Association for the Advancement of Science 2017 Annual Meeting. The session was featured in a news article published in Science Magazine.

Shari and Rick will present the survey results for you this morning. The remainder of the workshop will consist of presentation and discussion of your thoughtful drafts for this Daedalus issue. We look forward to receiving your final drafts this fall, and our publications team will then work with you to copy edit your contributions and prepare them for publication next summer.

I am pleased to say that Justices Breyer and Souter have taken an interest in this project and offered their advice, and while neither is able to participate in this workshop, they look forward to seeing the issue.

We anticipate this issue will have broad interest among our members, the legal and scientific professions, and the press. Over the coming months, the project staff will work with Shari and Rick to develop an extensive outreach plan. Throughout this meeting, we value any advice you may have on possible audiences and venues to give this work wide circulation.

I would also like to take this opportunity to mention another Academy study, on Access for Justice. By some estimates, only 20% of low-income Americans receive the necessary aid they require as they move through the American justice system. Millions are left unaided and unable to negotiate a complicated legal system on their own.

Academy Members John Levi, Martha Minow, and Lance Liebman chaired an exploratory meeting a year and a half ago to assess the magnitude of this problem and generate ideas about how to enhance citizens’ access to justice. We have now started a project to analyze the existing data on who is and is not moving through the civil legal system with the aid of counsel, what we know about pro se litigants, and what that information can tell us about the current state of civil legal aid and the justice system.  The study will produce an agenda for further research and will also inform an issue of our journal Daedalus on this topic.

I want to express again my gratitude to both Shari and Rick for the time they have devoted to help us think through the agenda for this meeting and for the project. I believe that this issue of Daedalus will prove to be one of the most important issues we have produced in recent years.